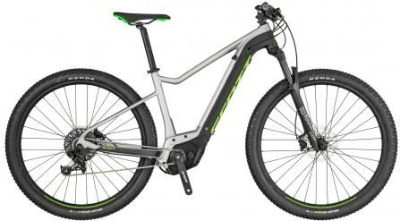 Scott have a great heritage in both road bikes and mountain bikes. They have also been making electric bikes for longer than many other brands. We love the Scott brand and this is our 5th season with them.

The Bosch PowerTube has been around for a couple of years now. It weighs in at just 2.8kg and is one of the lightest batteries on the market, further reducing its impact on the overall feel of the bike. Despite its modest design, it still packs impressive capacity – the 500Wh on offer should be more than enough to power you through even the most demanding of rides. The battery is easy to remove and insert, popping out of the frame when unlocked.

This is now great value at £2399. Note: only available in Medium.

The bike has the Bosch PerformanceLine CX motor. This is Bosch’s most powerful and market leading motor capable of up to 300% assistance (75 Newton Metres) in Turbo. The Bosch system has 4 levels of assistance – from Eco (50% assistance) up to 300%. The system includes the dynamic E-MTB mode. This responds to the rider’s needs and will switch seamlessly between Tour and Turbo mode as needed depending on the cadence rate of the rider. The Bosch motor has the following advantages over other motors in its class:

The suspension is one of the areas with a higher spec when compared to the Aspect eRide 40. On this bike it is Rockshox Judy with 120mm of travel and includes remote lock out.

The other area where this bike has an improved spec over the 40 are the gears, which on this bike are Sram’s 11 speed with a first gear of 42 teeth and of course a Sram chain.